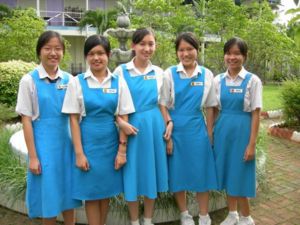 
This is the latest BURNING issue among students and concerned parents in Penang.


The 16 year old son of a prominent politician, a VVIP so to say, is said to have been sacked from a Chinese secondary school on the island after the boy was found to have fondled a female student in SMJK Heng Ee.


Pro-Opposition blogs were among the first to pursue this felony following unconfirmed news that the VVIP had paid the more than 200,000 ringgit to the victim's family. Basically the 200,000 ringgit is to SHUT their mouth.


It was claimed that the VVIP had also managed to get a place for his son in another school - Sekolah Menengah St Xavier.


When the issue became the talk of town, the overzealous pro-Opposition blogs which were all the while insinuating that the VVIP was a Penang Barisan Nasional politician, suddenly stopped even a slight mention of this juicy 'breasts fondling' matter.


Several Penang-based independent bloggers have since picked up the issue following a series of serious allegations that the culprit was actually the son of a Batu Pahat born VVIP (currently on duty on the island of Penang).


These latest allegations have raised a few pertinent questions -


1 - Did such an act (fondling of a school girl) actually take place in one of the prestigious Chinese schools in Penang?


2 - If indeed there was such an act of gross misconduct bordering criminality in a prestigious school in Penang, did the school authority institute any form of action against the culprit?


3 - If indeed the school had sacked the boy, as initially claimed by some pro-Opposition blogs,  how did he manage to get into another prestigious Chinese school in Penang?


4 - Is it true that the Batu Pahat-born VVIP father of the boy had paid-off the female student and her family via a third party?


5 - Is it also true that a prominent businessman had, through the Chinese Chamber of Commerce, contributed a few MILLION RINGGIT to the school in which the alleged 'fondling' took place - this time to shut the school authorities mouth?


6 - Did the school in which the alleged incident took place, file an official report to the Education Department?


Below is one of the blog posts with some sketchy details and damning allegations. 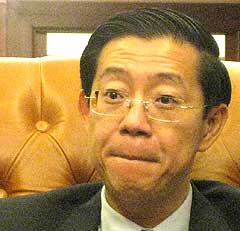 Penang Chief Minister Lim Guan Eng has declined to answer allegations in pro-Umno blogs that a VVIP’s son was involved in a case of outraging the modesty of his female schoolmate.
Lim, who is DAP national secretary-general, has challenged Umno instead to publish the allegations in “their newspapers”.


“Let Umno publish the news first, then you will see what I will do,” said Lim during a press conference in Penang today.
“What happens now is they make allegations, then I reply (baling batu, sembunyi tangan). Why should I reply to them every time?” he asked.
Lim said he has better things to do then to reply to each and every allegation or speculation against him.
Earlier, when contacted, Lim’s wife, Betty Chew, also declined to comment, saying, “Please ask CM about it”.
The Penang media fraternity was abuzz today with  news of a VVIP’s son who has allegedly been caught for alleged sexual harassment of a female schoolmate.
The unsubstantiated allegations are going viral among pro-Umno bloggers, and that the identity of the VVIP has been speculated to be that of Lim.
It was claimed that his 16-year-old son had been recently transferred from a Chinese school, Heng Ee, to the well-known St Xavier’s Institution recently due to alleged disciplinary problems.
However, the school has denied the allegation, saying there was no truth in the rumours.
The issue was first higlighted in a pro-Umno blog where the blogger Dr MiM - who blogs atnovandri.blogspot - said that many had already speculated about the identity of the boy.
He added that pro-opposition bloggers are “biting their fingers” because the VVIP is not from BN but from “their own species”.
“If you are wondering who is this VVIP from Penang - he knows calculation and mathematics that he is able to calculate (set a price) at RM100,000 for each breast groped by his son?” quipped the blogger.‘Transfer carried out according to procedure’
Meanwhile, a source from Heng Ee school said Lim’s son had indeed been transferred to another school but that the process was carried out according to proper procedure.
He denied allegations that the boy was moved to St Xavier’s Institution due to disciplinary problems, as alleged.
“He was a prefect and has done quite well in the academic field. We did not want him to leave. Even his parents did not want him to leave but he preferred to study in another school,” said the reliable source, who requested anonymity.
The source said he was quite surprised to hear about the allegations in the blog.
The blog has published a photo of the girl, but the source denied that it was the individual allegedly involved.
***************
Attempts by members of the mainstream media to get comments from the school authorities have been futile as the standard answer was - 'No Comments".
But why 'no comments'? This just adds fuel to the fire.
The school concerned should either deny or confirm this matter since its a very serious issue. (Malaysiakini's self created SOURCES from Komtar doesn't answer any of the questions)
Parents are now worried about the safety of their children, in particular their school going daughters, as schools are said to be covering up serious crimes for the right amount of 'compensation'?
There are no two ways about it. The school authorities must come clean before more serious crimes like rape and murder takes place within the confines of  our schools.
The Education Ministry MUST order an immediate investigations into this latest fondling-scandal involving a VVIP's son in Penang.
It is the responsibility of the Minister of Education and/or his officers to instruct the state Education Department to furnish a detailed report of this incident as it has clearly tarnished the image of Chinese schools in Penang and those administering them.
p/s Wee Ka Siong, mana lu?
Posted by THE BENCHMARK at 4:01 AM 3 comments:


Issues pertaining GLCs is once again in the limelight. Not that the GLCs have transformed inline with the GTP but there seems to be increased participation or rather manipulation by a few individuals with notorious background.


It is rather brave for MP Zahrain to dabble into these serious issues plaguing GLCs and the Government.


Mysterious deals highlighted in Parliament yesterday casts a bad image of the GLCs and by extension the Government led by PM Najib Razak.


Is PM in the know of these mysteries in our GLCs?


Zahrain is proposing for the Public Accounts Committee to grab the bull by the horn and investigate some recent deals, in particular those involving Sime Darby and E&O and MAS & Air Asia.


The Securities Commission too has been under the spotlight for quite sometime but maybe that would be settled with latest unconfirmed news that Tan Sri Zainah Anwar may resign soon, voluntarily, to enable her husband to remain active in the corporate world.


Another point to be noted in the parliamentarian's debate was his demand for the Public Accounts Committee to re-visit the controversial ECM Libra - Avenue Capital merger.


Has the PAC under the current leadership mustered sufficient guts to go after the BIG FISH? 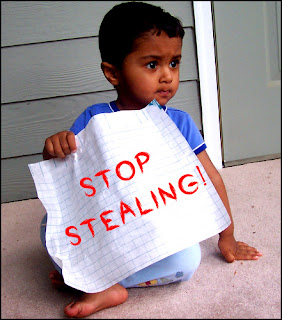 Posted by THE BENCHMARK at 11:09 PM No comments: 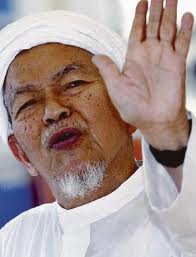 Kelantan Mentri Besar dan Pas spiritual leader Datuk Nik Abdul Aziz Nik Mat has made it clear, once again, that Hudud will be implemented in Kelantan.
Speaking at PAS’ 60th anniversary celebrations in Kepala Batas last Saturday, Nik Aziz reiterated his stand and expressed confidence that if Pakatan Rakyat takes over the Federal government, they would amend the Federal Constitution to enable the implementation of Hudud in all states.
In the same breath, Nik Aziz said the Islamic syariah (criminal) law would not be applicable for non-Muslims.
PAS president Datuk Seri Hadi Awang echoed his spiritual leader, stressing that PAS would continue to champion Hudud despite the overwhelming objection from within Pakatan Rakyat.
Pakatan Rakyat leaders failed to reach a consensus or spell out a clear solution during their meeting (last Wednesday) on Hudud in Kelantan, as insisted by Nik Aziz. 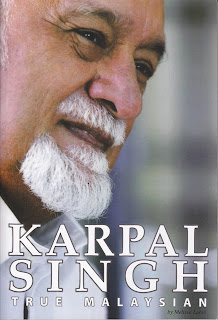 While DAP, in particular its chairman Karpal Singh, stands firm in rejecting Hudud in any part of Malaysia as ‘Hudud was against the Constitution, there has been no clear stand on the issue from the other partner, PKR.
Opposition leader Datuk Seri Anwar Ibrahim who spoke after the contentious meeting on Wednesday merely stated that all three parties would abide by the Constitution and their common framework as spelt out in Buku Jingga.
The next day, Nik Aziz thanked both PKR and DAP for respecting PAS’ ideology and reiterated that Hudud will be implemented in Kelantan and that the non-Muslims would not be subjected to the harsh punishment under the Syariah criminal law.
Except for Karpal who in unwavering in his objection against any form of Hudud anywhere in Malaysia, the rest of the DAP and PKR leaders seem to be either silent or are busy trying to sidestep the issue by conveniently blaming Barisan Nasional for their dilemma.
I have a few straightforward questions for PAS, PKR, DAP and their leaders.
You guys could chose to answer these questions as Pakatan Rakyat or as individual party leaders but please, please don’t confuse us with your answers.
I’m sure you guys still remember how to talk straight, free from your usual spinning-the-gasing style rite?
1.  What is your stand on the implementation of Hudud in this
country?
2.  Will Hudud be implemented in Kelantan?
3.  Why is it that you guys keep sending starkly different signals on
a daily basis?
4.  If Hudud is clearly against our constitution, why even talk about
it in the first place?
5.  Would you guys amend the constitution to pave way for Hudud if
PR takes control of the federal government?  Just tell us whether
it is a YES or NO.
6.  If the answer to Q No: 5 is a solid YES, why don’t you guys say it
out aloud so the voters could make a choice?
7.  If the answer to Q No: 5 is truthfully a NO, why don’t you guys
say exactly that and stop all this confusing double-talk ?
8.  Could you guys please decide on who has the final say (within
PR) about this contentious matter and not allow Nik Aziz to drag
us in and out of his turban?
9.  Once again, please give us a straight answer lah okay? Just say
Yes or No. 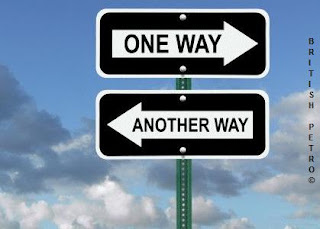 I really don’t know how to explain this Hudud drama to my 18 year old boy who thinks you PR politicians are idiots who can’t solve a simple matter.  I can’t blame my boy rite?
Posted by THE BENCHMARK at 2:28 AM No comments: