A lesson in Confucianism 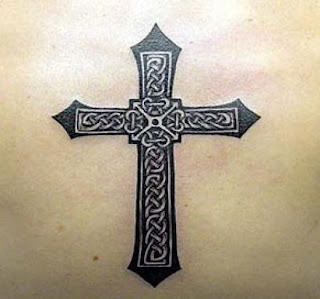 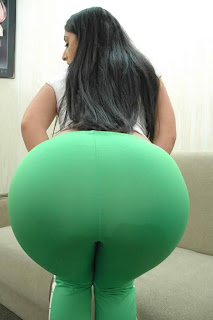 What would the holier than thou born-again Christians do if Utusan Malaysia had superimposed the 'tattoo' (at the top of this page) on the 'green round buttocks' to promote PAS' ceramah in Permatang Pauh tomorrow in conjunction with the once-in-four-years leap-year phenomenon?


What do you think the Christian extremist infested DAP would do?


Assuming Utusan Malaysia editors apologise profusely for over-looking the mistake and blame it on their not-so-sensitive moron of a sub-editor, would the Christian extremist in DAP accept Utusan Malaysia's apology and move on?

己所不欲，勿施於人。
"What you do not wish for yourself, do not do to others." 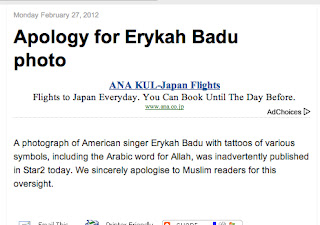 Posted by THE BENCHMARK at 12:13 AM No comments: 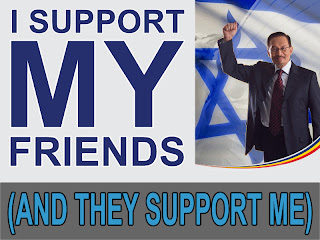 Contributing writer to The Jerusalem Post, Michael Ordman, whose piece was published on the online version of the newspaper (jpost.com) spared his punches for Datuk Seri Anwar Ibrahim, and instead went to town celebrating the Malaysian opposition leader’s defence of the Tel Aviv regime, which was carried by The Wall Street Journal (WSJ) recently.
“And from the political world, I personally liked the news of the high regard that Malaysian opposition leader Anwar Ibrahim gave to the Jewish State when asked whether he would open diplomatic ties with Israel,” observed Ordman in his piece “We have Lift-off.”
Also blogging for ‘Good News From Israel”, Ordman sits high on the Israeli media’s credibility chain  for his efforts in highlighting the regime’s latest achievements in the fields of technology, health, business, co-existence and building the Jewish State.
Last January 26, WSJ published Anwar’s provocative statement, in which he expressed support for the protection of the state of Israel, and in which the influential paper noted that  “…although he stopped short of saying he would open diplomatic ties with the Jewish state, a step which he said remains contingent on Israel respecting the aspirations of Palestinians”
What he said was evidence enough to merit the outpouring of criticisms from many pockets of Malaysians, who unreservedly expressed dread should he succeed in taking over Putrajaya along with his Pakatan Rakyat cohorts.
Following the statement in WSJ, Anwar subsequently came out with another statement on January 28 – this time through his official website, anwaribrahimblog, where he emphasised his desire for a ‘two states solution’ as the most apt panacea for the Israeli-Palestinian stand-off.
The ‘two states solution’ is an idea lobbied by Jewish apologist organisations in the likes of the International Crisis Group (ICG), which suggested that both Israel and Palestine be given recognition as legal and sovereign states, and that the Islamic world, in particular the Arab countries establish diplomatic ties with Tel Aviv.
According to Anwar his position was consistent with the principles held by PKR, which he said was in line with universal justice and the rights of the oppressed.
He pointed to Resolution 1397 of the UN Security Council and the Arab Peace Initiative, which were founded on the much-touted ‘two states solution.’
Back in March 2008, jpost.com journalist, Shani Ross wrote a piece titled “Anwar Ibrahim: Malaysia’s Future Prime Minister?” which unabashedly heaped praises on Anwar’s perceived resounding victory in the 12th General Election.
According to Ross, Anwar’s win had given him the much needed boost for the erstwhile Deputy Prime Minister to redeem his shine on the political road.
“As a proponent of moderate Islam, cultural and religious impartiality, and liberal democracy, Anwar's popularity is gaining strength, with some reports suggesting that should the opposition coalition win the next election, he may well be next in line as Malaysia's Prime Minister,” wrote Ross, who was also the Coordinator for the Executive Programs & Conferences at the International Institute for Counter-Terrorism (ICT), Interdisciplinary Centre Herzliya, Israel.
Posted by THE BENCHMARK at 4:00 PM No comments:


Anwar replies to the Israeli-Palestinian Issue at FCCT, Thailand 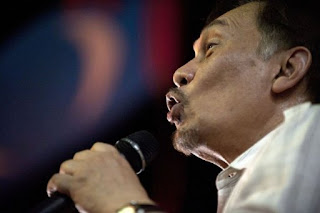 To a question posed by a journalist at a media conference during a programme organised by the Foreign Correspondents Club Thailand (FCCT), while avoiding eye contact and shaking his head, Datuk Seri Anwar Ibrahim agreed that his controversial statement published by the Wall Street Journal (WSJ) had brought forth a deluge of polemics in Malaysia.
Expressing regret that such a question was raised by someone whom he considered to be a friend (and ally?), Anwar reminded the journalist that he should realised how much trouble he (Anwar) was in over the Israeli-Palestinian issue.
Subsequently, Anwar went on trying to explain and justify his statement in which he maintained that the legitimate aspirations of the Palestinian people must be respected.
He said as long as the U.S. and Israel did not recognise Hamas, the two states solution agenda would forever be doomed to failure.
According to him, peace talks with Israel could only be a reality when Hamas and Fatah made peace with each other, along with the involvement of international bodies. That, to him, would be the best resolution.
Anwar, as reported by WSJ on January 26 said, “I support all efforts to protect the security of the state of Israel,” said Mr. Anwar, although he stopped short of saying he would open diplomatic ties with the Jewish state, a step which he said remains contingent on Israel respecting the aspirations of Palestinians”
Anwar continued to explain what he alleged was the context of his interview with WSJ by issuing another statement on his official website, anwaribrahimblog, last January 28 in which he agreed to the proposal for a ‘two states solution.’
The ‘two states solution’ is an idea lobbied by Jewish apologist organisations in the likes of the International Crisis Group (ICG), which suggested that both Israel and Palestine be given recognition as legal and sovereign states, and that the Islamic world, in particular the Arab countries establish diplomatic ties with Tel Aviv.
In spite of that, the ‘two states solution’ as suggested by Anwar was rejected by many including PAS President, Datuk Seri Hadi Awang, Dr Azzam Tarmizi of Ikhwan Muslimin and Palestine Prime Minister Ismail Haniyeh.
Why, even the Syura Council of PAS demanded that Anwar retract his statement or sue WSJ over the matter.
In 2006, when Anwar was residing in the U.S., he admitted that efforts to approach Hamas were a strategy to persuade and ensure that it agreed with the U.S. agenda.
“In fact, Minister Erdogan briefed me on what happened, and to my mind he was courageous and smart to take advantage of the opportunity to show Hamas that he respects the decision of the Palestinian people, and that he is prepared to work with them.
But it is also important to convince Hamas, "We want you to be a player in the international community, which means that there are some parts of your charter stemming from an angry period, which must be rationalised."
Engagement with Turkey provides an opportunity to convey to Hamas the need to moderate their position, and as an ally of the U.S., Turkey can legitimately tell Hamas that "Yes, we will also work with the United States to try to find common ground," said Anwar as reported by Julia Kirby of Pew Forum on Religion & Public Life, U.S.
Posted by THE BENCHMARK at 11:28 PM No comments: