Did KJ's buddy Patrick Lim sabotage Najib on the eve of polling day? 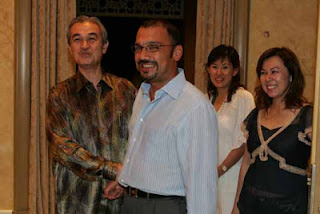 Is it true Patrick Lim has been painting a bad picture of the BN Government on the international scene although the Government gives him an annual grant of RM20 million to run the controversial Monsoon Cup?

The letter below, if its true, is very disturbing.

LETTER FROM A READER

I am a loyal BN supporter from ********* and never been against BN! The
last election although I was angry, frustrated and disappointed, I
still cast my vote to BN.

The main purpose I write this email is that, I do
hope Najib will re-look at what "cronies" that bring bad image to the
government esp BN.

I have worked with this company called Tbest which organised the
Monsoon Cup.
I love the event as it help promote the country and sailing in Malaysia.

With the event, a lot of international media and sailors, loved to sail at the Monsoon Cup due the rain and wind blow at 40 knots! It is like driving Formula One car
in the rain at Sepang. That is the thrilled of this event. It is a good products for the people of Terengganu.

However, the disappointment is that the person who runs the company and owned the event, Patrick Lim.

He has been receiving grants of 20million for the event each year and every year,
he has failed to pay suppliers, sailors on their prize money or simply delayed their payment for years no apparent reason. This has created a bad image and reputation
on Malaysia esp the government!

Why the bad name for the Government of MalaysiB? because every time he terminate, doesn't pay or delayed payment, the reason would be, "the goverment has not release the fund yet".

Don't tell me our goverment is that bad when come to international event? I know the Government have been paying Patrick Lim.

Why is a good event like that is given to people someone who has ZERO interest to help the people to Terengganu or give jobs to people?

This make a lot of people on the ground very angry with government esp the young urban people whose income has been rely on this event, either it is small or big but during "Monsoon" it created jobs!

This worst scenario was when the company gave notice of termination to the staffs before elections day!

The goverment has been very supported in funding the projects, why they have to terminate the staffs before elections! He is so insensitive to the political impact.

In the letter we received, the main reason of termination was, Monsoon Cup has not
been renewed so no fund to pay the staffs! But we Understand it has been renewed by the Govt. WHAT WAS PATRICK LIM's motive then?

Also, if there's really no fund, then why they keep all the Staffs in London ( which he brought the World Match Racing Tour in 2009)? 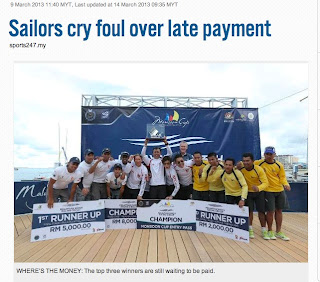 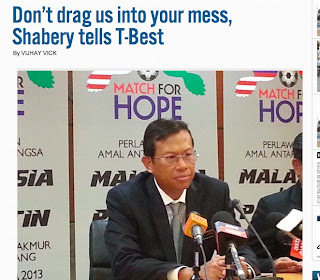 I do hope that Najib new goverment will look at this and please don't put KJ as sports minister because this Patrick Lim is his very good friend.

I'm just a concerned citizen who could tell the truth about such human beings who give everybody a bad name after being handsomely paid by the Government. Kesian BN.