NFC allows the opposition to feed a lot 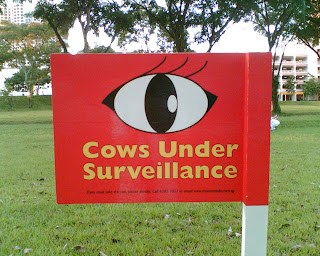 Focus is wanting, or focus in one thing that the opposition lawmakers and their supporters lack.
Now that they have managed to exploit the issue pertaining to the controversial national cattle farming project (The National Feedlot Centre, NFC) to the hilt, round two sees them foaming at the mouth just because the Inspector-General of Police Tan Sri Ismail Omar and the Public Accounts Committee have decided to probe the matter.
The earlier denials by Deputy Prime Minister Tan Sri Muhyiddin Yassin and Agriculture and Agro-based Industry Minister Dato' Mohd Noh Omar did not help, and neither did it stop some Barisan Nasional (BN) lawmakers from joining in the calls for action to be taken.
Action is being taken by the authorities, but action in this sense must be taken according to procedure. The seemingly uncivilised herd mentality that has affected the Pakatan Rakyat (PR) lawmakers and their cohorts, has made their consistent calls for government accountability, reformasi and democracy (their version of it, whatever it is) seem all, but worthless. The public is slowly but aurely becoming numb with overload.
It is all about politics being exploited and skewed - where everything goes and where the tiniest of blemish is magnified into a mountain of worries and do or die matter. This stance applies to both sides of the political divide in Malaysian politics, but even more on the part of the federal opposition as demonstrated in the Bersih 2.0 fiasco, the Lynas issue in Gebeng, Kuantan, the nonsensical harping on a diamond ring and much more.
It is indeed overkill for PR, just when they were already riding high following the 2008 coup of sorts, denying the BN the much-coveted two thirds majority in parliament.
It is now clear these people are not interested in being objective. Issues that do not serve their interest they ignore.
Issues like the the stealing of sand, the sudden sprouting of massage parlours all over Selangor, the sudden appearance of thousands of illegal Chinese sex workers, the fiasco and bad management of PKNS , and many more - are all completely ignored as though these issues do not leave any effect on the populace. Instead, they concentrate on attacking the establishment .
It is all indeed very one-sided and it is thus not surprising that the public have become somewhat immune to all the " news" they try to raise.
There is no finesse or intellectuality in their loud diatribes against whatever wrong, clear or present on the part of the long-holding power of the BN. Such a waste when there are  issues that have been properly dissected, leaving avenues for enlightening engagement with the other side jeopardised and clouded by uncultured and untutored spinmeisters who call themselves champions of their cause in the cyber world.
The barrage of nonsense and sensational ‘revelations’ by these spinmeisters often confuse the public, turning them off from the grandstand of local politics, and leaving the arena to be even more bloody.
There has to be an end to all these for the sake of Malaysia. The rakyat have become smarter but at the same time more gullible, too. So, that is why the opposition finds it quite easy to stir up sentiments for issues that they think they can champion.
Why, in this respect, even the congregation of pro-government/BN social media players who have been given recognition as cyber warriors to right the wrong perspectives of government policies is seen as something dirty.
The detractors – the opposition no less, seem blind to their own lot where they have legions of cyber bandits, cyber snipers and cyber idiots manning their forts in the ether. Such is their ONE-EYED disposition.
The BenchMark
Posted by THE BENCHMARK at 7:27 PM No comments:

WHO is AZIZ BARI the Activist! 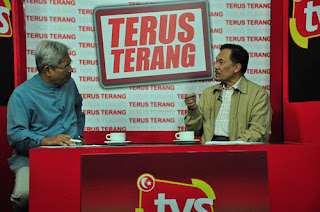 It has come to a stage where Prof Dr Abdul Aziz Bari is emulating the style of Datuk Seri Anwar Ibrahim, who when faced with issues would rather hold his silence and radiate an aura of the all-knowing and wisest of souls.

His involvement with the ‘Institute for Democracy and Economic Affairs’ (IDEAS) has been suspicious from the very beginning.
Although operating in Malaysia, besides Aziz, the other two fellows of IDEAS are not Malaysians, while four more foreigners serve as international advisors.
So, despite being a local outfit operating out of Malaysia and showcasing faces such as Wan Saiful Wan Jan and Aziz Bari, in reality IDEAS is coached and advised by foreign activists and receive funds from abroad. In this respect, can the organisation be trusted, as it claims to educate and foster a change in Malaysia?
Aziz has vested interests in this organisation. Perhaps, he may be receiving certain allowances when elected as senior fellow of IDEAS, but at the same time it is also publishing his book, “Perspektif Perlembagaan” (Constitutional Perspectives). A book that is almost similar was published by Anwar’s think tank, the Institute for Policy Research (IKD).
The revelation by the blog, ‘macamoranggila.blogspot.com’ came as a surprise when it claimed that Aziz was paid high royalty payments from IKD – much more than the market price of the book.
If that was so, is Aziz also getting high royalty payments for his book published by IDEAS?
Study the numbers on the income and expenditure statement of IDEAS, of which Aziz is a part of. The statement is from January 1, 2010 to December 31, 2010. Refer to the telling part on the left.
From the numbers it is proven that IDEAS received funds from six different foreign bodies, comprising Akademi Merdeka.Org, Atlas Economic Research Foundation (USA), Friederich Naumann Foundation (Germany), Grivelle Trust (UK), International Policy Network (UK) and International Property Right Index (USA).
Of the six foreign bodies, akademimerdeka.org exclusively operates out of Malaysia, Indonesia, Singapore and Brunei.
According to its website, “Akademi Merdeka.Org is a libertarianism ideas-based educational project by the Atlas Global Initiative for Free Trade, Peace and Prosperity.
“The mission of Akademi Merdeka.Org is to serve as a platform for the dissemination of libertarianism thoughts and understanding in the region, especially in Indonesia, Malaysia, Singapore and Brunei.
In the books section, works related to liberalism and by extension, those that relate to publications by IDEAS, IKD and MEGC (Middle Eastern Graduates Centre) are also promoted parallel with the vision and aims of the organisation.
From the combined efforts of akademimerdeka.org in promoting the sale of the books, it looks as though the four entities, namely IDEAS, IKD, MEGC and akademimerdeka.org are colluding in struggling for a common cause.
In a closed door meeting of Anwar’s friends early this year, Dr Yusri Mohamad and Ustaz Ismail Mina criticised the de facto PKR leader for deliberately keeping quiet – an act construed as giving his blessings to the publication of widely received pro-apostasy books by IKD and MEGC.
Further readings on the verbal intellectual clash between Anwar, Yusri and Ismail over can be found here www.akedemimerdeka.org
Aziz is the ‘main mover’ in a special unit within ‘Akademi Merdeka.’
Akademi Merdeka is another name for the Freedom Institute in Indonesia. It is powered by the supporters of Liberal Islam, including Ulil Abshar Abdalla and Luthfi Assyaukanie.
Its official website says,” The programme will be led by Professor Abdul Aziz Bari, the Senior Fellow Institute for Democracy and Economic Affairs (IDEAS), who is also a law expert from the International Islamic University. He will be using the modules he developed for the academy.
“The topics that will be critically discussed include Democracy, Constitutionality and the Constitution; Separation of Powers based on the Malaysian Constitution; Human Rights and the Constitution; the Special Position of the Malays and Islam; Federalism in the Malaysian Constitution and Facing the Challenges of Constitutionality.
According to the website, AkademiMerdeka offers scholarships to enable as many as people as possible to participate in Akademi Merdeka. All those interested are encouraged to apply for scholarships for either partial or full underwriting of the costs of participation and accommodation”
On last November 5, The Malaysian Insider quoted Wan Saiful Wan Jan in its report on the approval given by the Registrar of Societies (ROS) to the NGO, Angkatan Amanah Merdeka (AMANAH).
“Last night’s discussion was significant and fruitful. We have outlined many issues that will be implemented after this,” said its Vice President Wan Saiful Wan Jan, who admitted that developments in the run up to the 13th General Election will be maximised to power the activities and realise the objectives of the establishment of Amanah.
Last July 29, Tengku Razaleigh Hamzah, who is also the Member of Parliament for Gua Musang launched Amanah, an NGO touted to be the platform for the people in their struggle for truth and justice and in the fight against corruption, cronyism and racial harmony in Malaysia.
The six deputy presidents comprise the former Minister of Information Tan Sri Abdul Kadir Sheikh Fadzir, former MCA president Datuk Seri Ong Tee Keat, former MIC vice president Datuk S.Subramaniam, Datuk Wilfred Bumburing, Datuk Seri Bujang Ulis and Datuk Seri Daniel Tajem.
Besides Wan Saiful, the other vice presidents include Datuk Mohd Azmi Razak, Tan Sri Simon Sipaun, Ragunath Kesavan, Mohd Lukman Ghani, Ong Hock Siew and Dr Patau Rubis.
Posted by THE BENCHMARK at 12:48 AM No comments: